Ok, with this post I am officially caught up. Until Emily starts school this week!

Brenden has made it through his first week of first grade. He was so excited up until the night we went to meet the teacher. He suddenly wanted to know why the teacher wanted to meet him. Once we got there he became shy. He told me he wasn’t going to tell anyone his name that night. “What if they laugh at my name?” he asked. I assured him his name was awesome since I myself had picked it and that no one was going to laugh at his name. “What if they laugh at my hand?” he asked. Why would anyone laugh at your hand I replied, since he’s never asked me this. “What if they’ve never seen a little hand like this before?” was his reply. Again, I assured him that if the kid’s hadn’t ever seen a little hand like his before, they were going to be very impressed.

By Monday he was excited. On the way into school he was asking to be reminded of his teacher’s name. “I’m not going to call her that today.” Ok, honey, you don’t have to today (it’s a little trick for kid), but we should practice it. This conversation took place at the exact moment that I’d asked him to pose for a picture outside his classroom. The result is that he looks adorably terrified!

The new class has a color system. If he gets blue on his calendar that means he had an excellent day. If he gets green, it means he had to walk 2 lapse at recess time. The next color down is walking half of recess, the next all of recess ending with red meaning class removal. The first day Brenden came home with blue. The following two days he came home with green. For TALKING! Which is a constant thing at home, but never been a problem at school. Tuesday he also had a problem following directions. So when Wed. was only marked green for talking we tried to emphasize that he had at least improved! You see, poor little guy was feeling pretty awful that he hadn’t gotten blue. We had told him after the first day that while we never wanted to see red, and we preferred to see blue, we knew he was going to have some days were he got a green and that was ok as long as he was trying his best. But we did try to stress the DUDEâ€”stop talking thing. So he’s now convinced that if he gets red or gets green too many times we will hate him. I’m happy to report that Thursday and Friday he was back to blue though. Oh, and Friday was free snow cone day. So you know, good first week!

Now, let’s see if I remember how to place actual photos here without a link:(if you’re viewing updates obviously the answer is no, I don’t remember!) 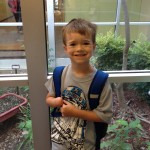 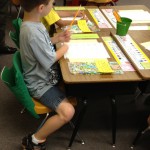