Ok, no music really, just trying to be funny. We got around 9 inches of snow on Thursday and Friday and all Brenden wanted to do was play in it. So we made several trips out and even took Emily one time. I was fortunate enough to have been given a snow suit for her, which at the time I thought we’d never use. 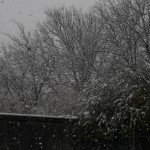 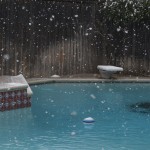 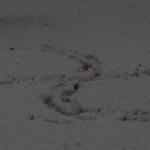 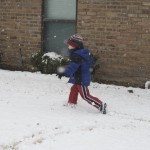 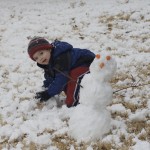 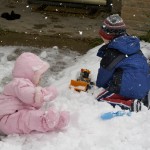 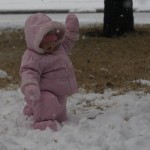 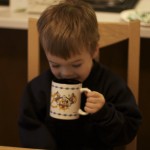 Brenden was actually a pretty good boy this week. He’s been sweet with lots of, “you’re the best mommy in the whole world!” And as long as we haven’t had to go anywhere and his sister isn’t taking his toys he’s been pretty agreeable. Monday night he was getting a bit sassy as we refer to it around here and so I decided we’d make a pizza. He loved helping put the toppings on the ready made crust. And though he at first did not like that I had bought mini pepperoni instead of the regular size, about half way through the bag he decided they’d be ok on the pizza. 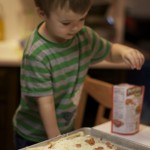 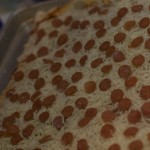 He’s decided he doesn’t like to have his picture taken after nearly four years of having a camera in his face all the time! So I was very happy to snap this random picture: 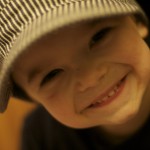 Emily Grace Burleson as Brenden has been referring to her

Emily has really been growing and changing lately. She is in some ways a much easier baby then Brenden was but in some ways so much harder. She gets in to all the things he never even thought about. She plays in the toilet. She gets things out of the trash. She puts EVERYTHING in her mouth. She opens cabinets and gets cleaners out. But she loves to laugh and smile and as long as she isn’t upset she plays very quietly. But watch out for those lungs if she is upset about something. Luckily, that really only happens if something is hurting her. 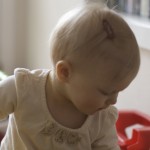 Getting closer to a bow. 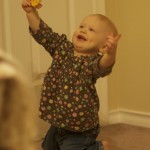 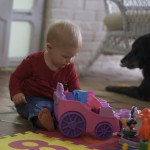 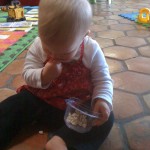 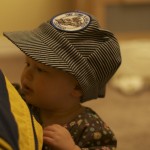 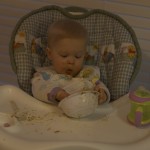