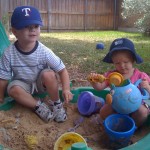 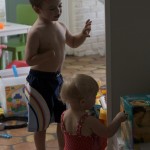 It’s all ready been a very hot summer and it’s just the end of June! We’ve been keeping busy and having a good summer though.

Brenden started a class at the area rec center a few weeks ago called “fundamentals of preschool”. He seemed to be getting bored at home and had started to ask someone to play with him every 5 minutes. Even when we were playing with him. I also wanted to make sure there wouldn’t be behavior problems for when he starts preschool in the fall. I wasn’t entirely convinced he could sit still and follow directions. He’s been doing amazingly though and in just three weeks has learned so much. He’s got 3 weeks left and I think he’ll be sad when the class ends. He’s actually excited to get up and go every Monday and Wednesday.

On Friday’s I’ve been sending both kids to mother’s day out at the place Brenden’s been going to for 2 years now. It’s a good chance for them to run off some energy and play with other kids. I think Emily especially likes the change of scenery.

Brenden always wants to stay home and play with his toys on the in between days. He’s very much like his mamma. While it’s nice to get out and see friends, he needs his time at home too.

Emily is in the stage where so much personality is coming out now. She’s a stinker. Really sweet and cuddly and easy going. Most of the time. But man she has a temper and she’s stubborn. Actually, that applies to both kids. Brenden is very much a drama king and extremely sensitive. He can cry or get mad at the drop of hat. Emily usually is mad about food or sleep.