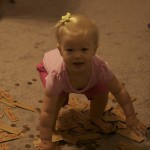 We have a huge jar of pennies in our room that Brenden likes to dump out and play with whenever he comes in. Today he’d dumped them all out and then abandoned them to watch a movie. When Emily came into the room she stood in the pile of pennies and threw them everywhere. Brenden got mad at her and told her, ” Stop Emily. It’s not a circus!” Most days I have to disagree with him, but it made me laugh.

When we first started going to Hands Down support group meetings at Scottish Rite, someone asked what age the kids would become aware their hands were different. Several parents answered that it would be around age 4. Patrick and I thought this was crazy late. Brenden always played with his hands and he is so observant. It just seemed like he got it already. But as we are quickly approaching 4 (next week, yikes!), his level of awareness about his hand has really changed. He’s mentioned sweetly and not at all sadly several times that he wished he had two big hands.

Last week there started to be a lot of comments about not being able to do things because he didn’t have two hands. After listening for nearly 4 years to other parents say their kids never say they can’t do something, I was a little surprised to be hearing this. But the group had also given me the confidence to realize there were ways around this. I quickly told him oh yes you can do it. Then I spent a day or two taping cut up toilet paper rolls to things like pom poms, drum sticks and a jump rope. The drums were the first thing I “fixed” for him and he just couldn’t have been any prouder of himself drumming with two hands. Emily and I had to join in him in a marching band and then later that day the band was reformed with Patrick in my place.

So we’ll get through it all just fine, but for a moment there I remembered this can be hard. 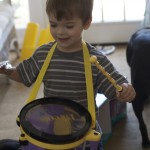 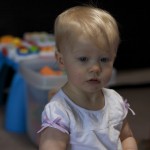 Emily is getting to be such a big girl. She cruised for about 6 months before finally decided to walk a couple of weeks ago. Now she is bravely taking more and more steps everyday. I think she likes that if she walks, it’s easier to carry stuff with her.

Grandma and Grandpa taught her to sing Rollin’ on a River and roll her arms. She’s eager to try and repeat words when she hears them, but when she wants something she just points and screams. She loves to laugh at her brother and when he’s not in the room she calls for him by name. She still wakes up at least once most nights, but she goes to bed so easily I almost don’t mind. Unless of course she isn’t in her own bed and then she puts up a huge fight. But still, a nice contrast to little Mr. I can stay awake in my bed until 11:00 p.m. before I have to give into sleep.

She plays has a baby doll she loves and she gets excited and loves on it when ever she sees it. She like to put the toys coins in the toy piggy bank and the pretend cookies in the toy cookie jar. And she also like whatever Brenden is playing with.

We had a low-key Easter today. We’ve been running around like crazy so we decided to just have a slow weekend. The kids were excited to wake up and find the Easter Bunny had come. But I did get to wondering how kids are ever supposed to feel safe at night when they think all these people come in the middle of the night. I mean, Santa, the Easter Bunny, the tooth fairy (which for some reason Brenden has been talking a lot about lately), who else is coming in? 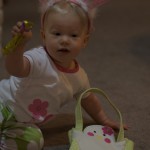 She makes a cute bunny. 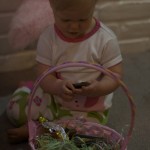 She figured out how to open and eat her chocolate bunny all by herself. 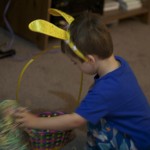 Making sure he got everything out of the basket. 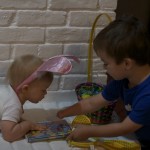 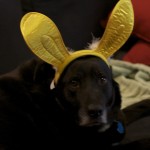 It was all Brenden's idea to put the ears on the dogs. 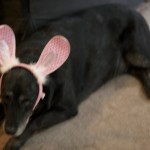