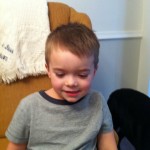 Last Monday Patrick and I went to a conference with Brenden’s preschool teacher. Brenden is smart, but if he doesn’t want to do something, he doesn’t do it. So I was prepared to hear that he has trouble in class. But she only had nice things to say about him. She said he’s very smart. And he’s a leader. She told us that all the other kids are waiting to see what he’s going to do and he’s totally oblivious to it. It’s nice to get a little perspective. At home, we just think of it as bossiness!

The only area she was concerned about at all is his handwriting. We discussed how whenever he uses a fatter object to write, his writing is great, but when he uses a regular pencil he has a really hard time controlling it. We are going to try letting him use the old school kindergarten fat pencils and see if that helps. She did note that his writing has greatly improved since the start of the year. And also, that he can sit still longer!

She reinforced our choice to send him to kindergarten at this school. It’s a class of only 12. He’ll get lots of one on one time and he really needs that. Also, it’s probably the only time we’ll ever be able to afford a private school for him!