Last week I took the kids to the mall in Frisco. The play area was very busy at first. One kid grabbed on to Brenden’s leg and basically shoved him off the top of a rubber waterfall. He was not happy, but quickly got back into playing. Eventually it slowed down enough in there for me to put Emily down and let her have some fun too. She took right to climbing on things and through the tunnels. 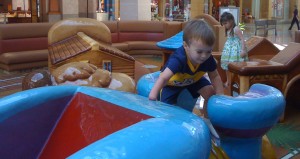 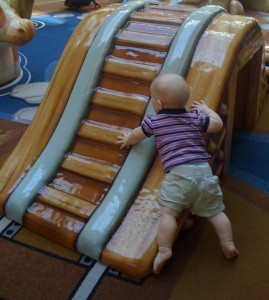 Later that day Brenden was eating some yogurt and came up to me looking like this: 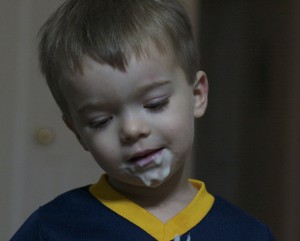 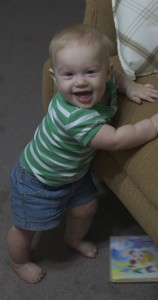 Emily was so happy here I had to take her picture. And I didn’t want Brenden to feel left out, so his is below. 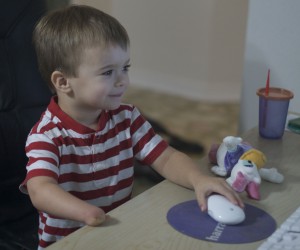 One night I was cooking dinner and put Emily in her exersaucer. She’s really getting too big for it, but I needed her safe while I cooked. After I was done cooking I got her out and this is where she went: 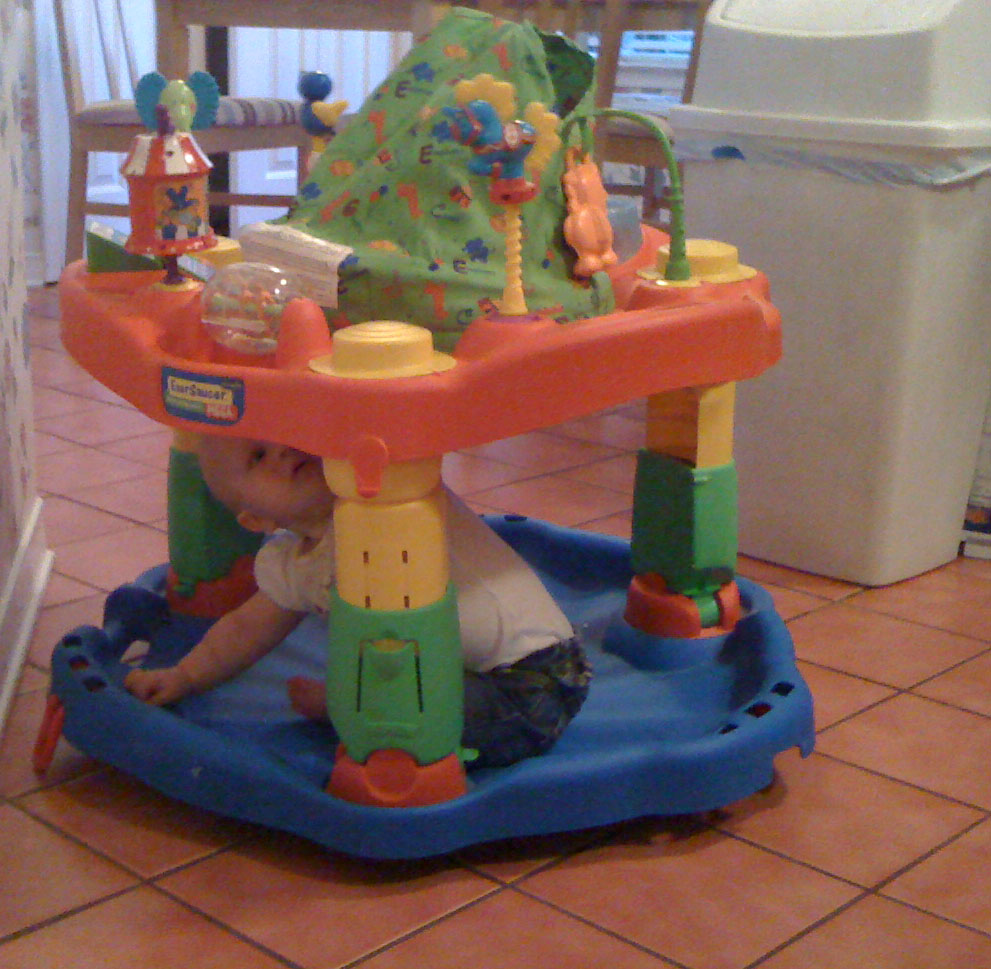 She’s just such a happy girl! And yes, these pictures were all taken in the same week! Just a smidge of variation in the weather. 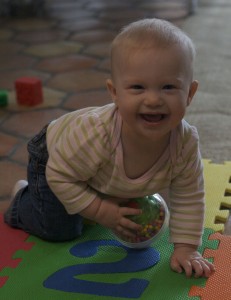 One day I was really losing my cool with Brenden and I guess it was showing because he looked up at me as I put his shoes on and said, “be patient Mom.” It was like God himself was speaking to me. I had really needed the reminder to have patience with him at that moment and it gave me goosebumps for him to say it.

Somehow patience evolved. Now I get told to be patient or patience whenever he doesn’t like what I’m saying to him. If I sing it’s, “Mom, be patience. I told you.” If I correct him more of the same. If I ask him a question he doesn’t want to answer or tell him to go potty or to bed more patience are needed. If only he knew how patient I was being with the whole patience thing!

Another day recently he really got me again. We always tell him that if someone asks about his little hand he can tell them he was just born that way. Well, we were playing with his toy kitchen together and he accidentally slammed my finger in the fridge door and it really hurt. He apologized and asked if I was ok and I said yes but that it really hurt. His response? “It’s ok Mom, you were just born that way.” Loved it.

Photos of the week

Yesterday I took the kids to Toys R Us. We were searching for a toy to be Emily’s special toy so that she might stop snatching Brenden’s special Mickey Mouse Clubhouse toy and characters. Brenden took a test drive in all the cars and pronounced this one his favorite. 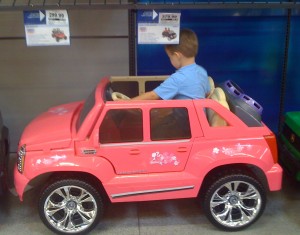 This morning before leaving the house he decided he needed to wear his conductor’s hat. 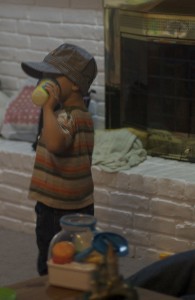 Patrick got last minute tickets to a pre-season Stars game this week and we decided to go and take the kids. It was the first time we took them to a game and we weren’t sure how they’d do. But since the seats were free and it was still pre-season, we decided it was a good time to try since we could leave early and not feel bad.

Emily did great and didn’t seem too bothered by the noise. I of course was worried the whole time that she was going to be deaf by the end because it was so loud. Brenden was really excited. He told us right away that he wanted some popcorn so we got that and he sat in his seat and held the box and ate it. He also keep wanting to go down the stairs to the railing so I’d walk him down there and let him look. He was really excited about the big Chili’s chili because for some reason he likes to say, “Welcome to Chili’s.” It was not coming our way, but he kept hoping.

Towards the end of the 1st period he’d decided he need to sit in the empty row behind us by himself. A 4-year-old boy in the row in front of us came back to look at his little hand. He really want to touch Brenden’s little hand and was not backing down even though Brenden was only interested in talking about all the things he could see. The little boy just didn’t understand why he couldn’t touch it.

During the break Brenden told us he was ready to go and we decided that was fair as it was already bedtime. Patrick stood up at the end of the isle holding Emily with Brenden at his side while I was getting all our stuff picked up. I looked down for a split second to grab Brenden’s coat off his seat and when I looked up Brenden was bumping his way down every stair. I sat in shock and watched. A couple had just stepped into the section and the man ran down and got him. I was too shocked to move at first but I was also simultaneously thinking he should not be moving an accident victim and that I was very grateful that he was picking up my now screaming child. I got up and took him and looked him over immediately seeing a big bump on the side of his head. We filed an incident report and had the on site paramedics look him over. They pronounced him fine. Brenden was impatient to get to the car and tell his stuffed Daisy Duck about the dramas and the tragedy and get home. So we figured he really was fine, but man did he give us a scare. 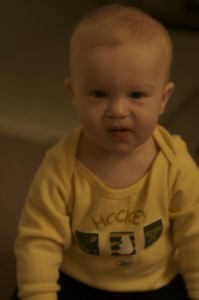 Emily is Star suited up and ready to go! 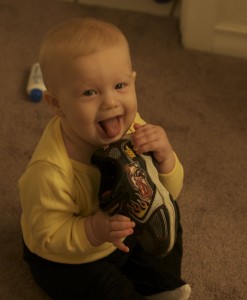 She loves to eat Brenden's shoe. 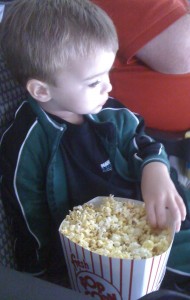 Kicking back with his popcorn snack and a little hockey. 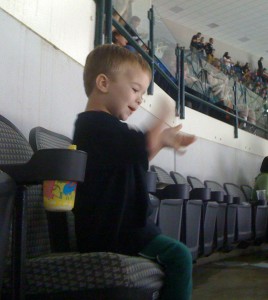 He has no idea why he's clapping but everyone else was. 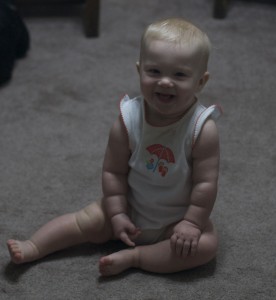 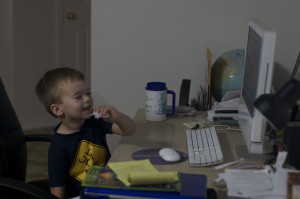 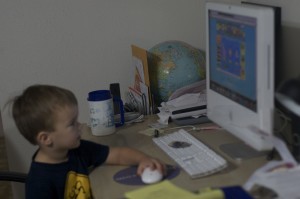 Emily hits 8 months on Saturday. Can not believe how quickly it’s gone. Here are a few pictures in honor. 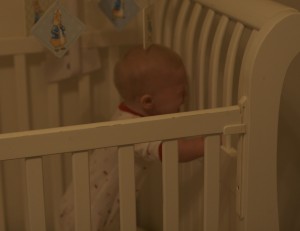 This is the sight that greets us when we go to Emily's room now. 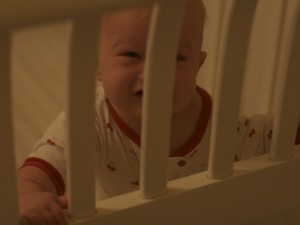 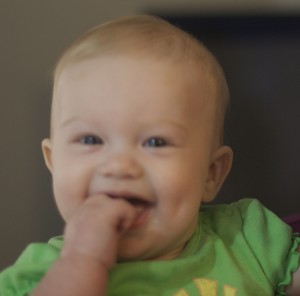 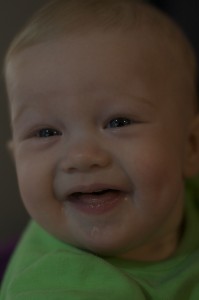 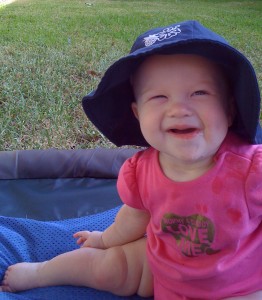