Today I took Brenden to his favorite haircut place for a much needed haircut. He can sit in a car and watch a movie while they cut his hair. And also, he can play trains at the train table there while he waits. So most of the time, he’s pretty good and enjoys going there. So we braved the cold rainy day. Here is the handsome boy post haircut: 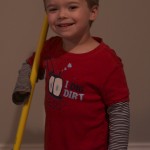 I had been thinking for a couple of days that Emily’s hair was getting a bit mullety so I was sort of contemplating her first haircut, but wasn’t really ready to commit. After seeing how great Brenden’s hair looked though, I gave in this evening and cut it myself. I’m sure I’ve set her up for the life-long struggle with bangs that I’ve had, but surely seeing past your hair is more important than style? Ok, I don’t know, but it seemed like a good idea at the time. So I cut some bangs and evened up the back. It’s wasn’t a drastic cut by any means, but somehow it makes her look so much older. Harder to see in the picture I’m posting because I have it up, but when it’s down, it’s a big difference. Before and after: 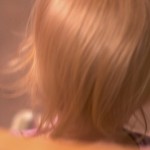 Before. The part in the center was really long. 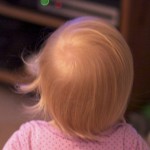 The back after. Hoping I haven't seen the last of her little curls. But the sides are still fairly curly. 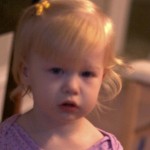 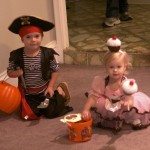 Brenden originally wanted to be a monster for Halloween this year. He’d described in great deal what this monster should look like and I was getting worried because I had no idea how to make it happen. On a trip to the dollar store in search of something unrelated, he saw a set of pirate stuff and decided then and there he was going to be a pirate. And luckily, he stuck with it.

The kids were really great trick-or-treating this year. The neighborhood was so different than last year. Last year, hardly anyone was out when we were and hardly anyone was giving out candy. This year, lots of people were out and a lot more were giving out candy too. The kids walked all the way up the street behind us zigging from one side to the other. Then we walked down our street and back to our house. Brenden said “trick-or-treat” almost every time and they both said “thank you” every time. They did have to be reminded, but considering last year Brenden wouldn’t talk at all and the year before that we did about 3 houses before he was done, I think it went really well. And we got so many compliments on the kids, especially the little cupcake.

We only got 3 groups of kids at our house and Brenden was eager to hand candy out to them. 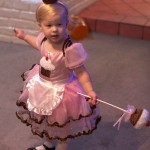 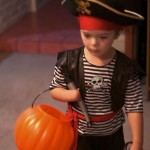