A few pictures from our day

Here are a few pictures of our day yesterday: 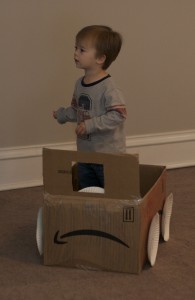 Brenden had been enjoying playing in this box, so we turned it into a car. 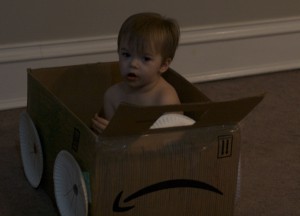 He really likes the steering wheel and the windshield. 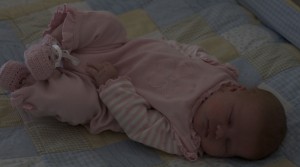 Look how cute and pink she is. 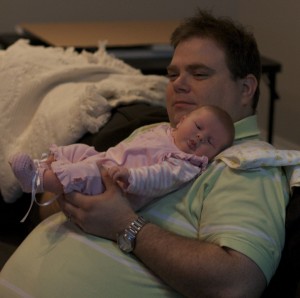 After a long day at work Patrick spends some cuddle time with Em.

After having my Mom here to help for the last three weeks we took her to the airport this past Saturday morning. We won’t get to see my parents until the end of March. They’ve been such a huge part of our daily lives for the last few years that it will be a big adjustment for us, but I’m really excited for them about the adventure they are on.

My Mom helped out so much while she was here. She watched Brenden while we were in the hospital and paid lots of extra attention to him when we got home too. She also accomplished something major by getting him to sleep in his bed again. ( he hasn’t been doing that since we moved-he’s been on the floor in his room). He’d also developed a bad habit of thinking he needed the overhead light on to sleep and night and she helped get him down to just a lamp.

Thanks for all your help Mom! We already miss you guys.

Brenden developed an imaginary frenemy while we were at the hospital. His name is Cocoa and we can’t tell if he’s nice or something to be feared. He seems to switch. Brenden’s been telling us he’s scared a lot lately. I’d think it was a ploy to keep us in his room at night if he didn’t actually look so scared.

Patrick went back to work on Monday. It’s busy season there, which means he can’t even think about coming home until 7. 3 days in and I’m not enjoying busy season much, but I never do. I really liked having our little family together all day. But I guess we’d be homeless if we did that for too long!

So it’s just been Brenden, Emily and I during the day and though we’ve had some rough patches, I think we are gonna make it! 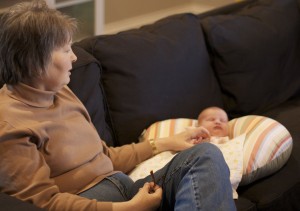 Grandma and Emily enjoying some time together. 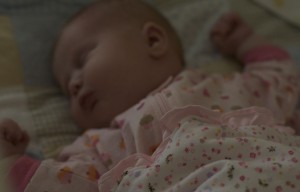 Mom took this picture of Emily before the night before she left.

Though we all wanted to watch the inauguration coverage on Tuesday it didn’t seem to work. There were doctor’s appointments to attend, a pool guy to wait for and then I got really sick. Luckily, we’d recorded the coverage.

Wednesday morning when I woke up, my Mom told me that Brenden had been saying Barack Obama all morning and he started to say it again. They hadn’t talked about him or anything. Brenden was just saying it. We started watching while Brenden took his nap, but he woke up early and was watching some with us. He said, no Barack Obama. But when we were done watching he wanted “Barack Obama again.”

Last night before bed we were all sitting in the office watching my screen saver display all our pictures. A picture of the Washington Monument appeared and Brenden said, “Barack Obama.” We were all amazed that he recognized it as the same place without all the people and the flags there.

My Mom semi-jokingly told Brenden yesterday that he was driving her crazy and his response was “driving McDonalds.” I’m not sure if he seriously wanted her to take him there or if he knew that he was making a joke, but once he found out it was funny, he has made it into a joke. And it’s pretty funny.

He has two other phrases that I really like right now. One is “I can’t sleep.” Which is said anytime sleep is mentioned. The other is, “I can’t like it.” He means he doesn’t like it, but it sure is cute!

A party for Miss Emily

My friend Kelli threw a “Sip and See” party as a way for us to have friends over to meet Emily. The party was a book theme and Kelli worked hard to create book themed dishes such as Green eggs and ham. It a really nice day. Here are a few pictures. 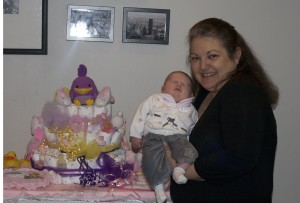 Linda and a friend made this wonderful diaper cake that has kept us all looking to see what new things we can find hidden in it! 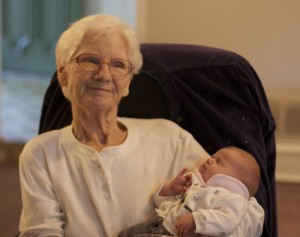 Patrick's grandmother made a special effort to come meet Emily and we were so glad to capture that in a picture. 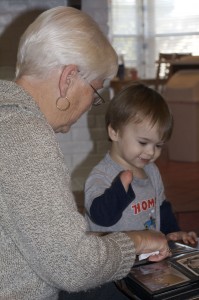 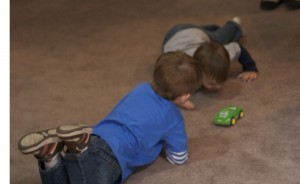 Noah and Brenden were happy to have each other as playmates and enjoyed playing with cars together.

I’m finally writing about Emily. But I’ve been looking back at this blog and realized I didn’t write about Brenden until he was 3 weeks old, so I’m still slightly ahead! 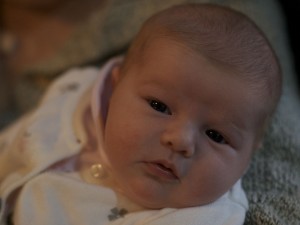 The first picture of Emily with her eyes open.

Emily was born January 5th at 3:58 pm. She was 9 lbs 12.3 oz and 19.5 inches long. Though going into a c-section knowingly is a lot scarier than going into an impromptu one, I made it through fine. I had pain in the hospital but it was so much less pain than the first time around and I feel like I’ve healed much faster. (Though I did come down with bronchitis that really knocked me down for several days and am just getting over that!)

Emily lost 11% of her birth weight before leaving the hospital, which is 1% more than the doctor’s like. We were having trouble with feedings. But after switching to formula she’s building back up. At her two week appointment her stats looked like this: 9 lbs 7.4 oz 20 1/2 inches long and a tiny head at 13 3/4 inches. We’ll go back on Tuesday just to make sure she’s made it back up to birth weight, but judging by the vigorous eating the girl does, she’ll be fine!

Brenden really loves her. He loves to get right in her face when she’s sleeping and say, “Emily, Emily, Emily.” And also, “Emily you ok?” She’s a great sleeper and so far, has been a pretty easy agreeable baby.

Here is our first family photo: 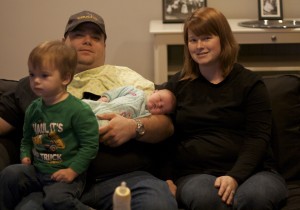 Pictures from the day

I realize I haven’t written and properly introduced Emily yet, but I know Patrick emailed and blogged already. I will write soon, but for now a few pictures from today. 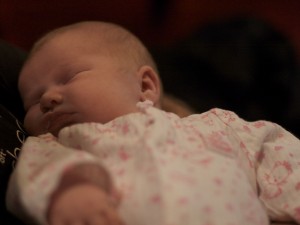 Finally a closer look at her faceâ€“Even if there is a little spit up! 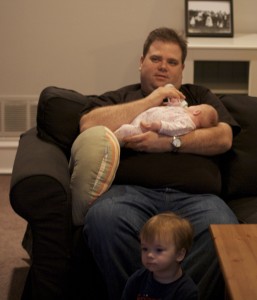 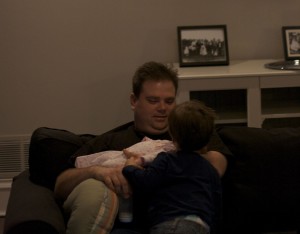 Brenden likes to say Emily Emily Emily and hold her hand. I think right about here though he was busy getting his chocolate cake fingers on her!