I’m constantly taking little videos of the kids with my phone but I never do anything with them. Poor Emily is going to feel slighted after all the videos I posted of Brenden when he was little. So here is one I took of Emily this week:

Religion, spirituality, and God in general are a rather confused topic in this household. Consequently we haven’t done much in the way of discussing this with the kids. However, the preschool that Brenden attends is through a Methodist church and every Wednesday they have chapel time. Occasionally Brenden will come home singing something about the Lord or something else that never ceases to throw me off just a bit.

One day he was talking to me about how he learned that God was up in the sky, and to him that meant in space. He’s not God to Brenden though, he’s Gourd, which I can only assume is a cross between Lord and God. A few days later Brenden told me that Gourd made us on the wing of his spaceship in space but he was deeply concerned about how we got down to earth from way up there in space. He decided we all must have slid down his tongue.

Right before Christmas he told me that he thought Gourd was just pretending he made us but that it was really Santa Clause that did it.

I absolutely love is version of thingsâ€”something only a kid could come up with!

I’m a little behind on this blogging thing, so I’m going to catch up tonight. Emily turned the big 2 last week. We had a nice quiet birthday part for her at home. Maybe next year we’ll do something with friends, but this year, we kept it simple again. 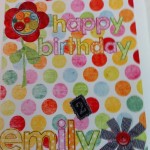 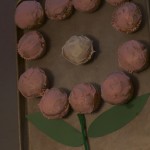 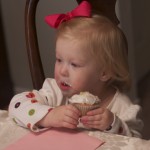 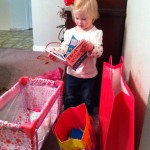 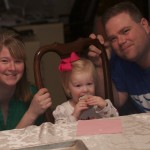 She had a checkup the next day and seems to be growing well and developing just fine. The doctor was impressed with the amount of words she can say and how many she can put together.

And both she and Brenden were happy that there were no shots.